Muuuuum, can we have a puppy please?

The majority of the mummies I know have stopped having babies. Instead many of their homes are now enjoying the pitter patter of tiny paws as a cute-as-you-like puppy joins the family. I have to admit I’m quite jealous. I would love to have a dog again – my faithful German Shorthaired Pointer died when my first child was a babe in arms. And that baby is now a seven-year-old daughter who is desperate for me to take the plunge again. 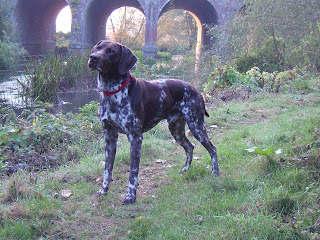 Officially the world's best dog - ever.
To be honest, I feel a little odd without a canine companion. This is probably because I was raised by dogs. Well, not literally – I don’t walk on all fours and greet my friends by sniffing their backsides (I don't) – but from age eleven I was raised alongside dogs. In a house that prioritises dogs and revolves around dogs. My parents breed, show, work, train and judge them. My mum spends her time organising dog events and attending them, promoting welfare and then discussing all this with like-minded pooch obsessives over the phone or Internet. Accordingly, my first ‘proper’ job was at Dog World, which produces Britain’s best-selling weekly canine newspaper (although I worked on a title about fish…).
But despite the fact I kinda want a dog and my daughter so very definitely wants a dog, I still feel some reluctance. I put this down to the fact that getting a dog is such a huge commitment. First you need the time and energy to be able to train a puppy properly, and then you need the time and energy to make sure the adult dog it grows into is taken care of properly. For maybe about 15 years! I haven’t even been married as along as that…
In the meantime, my daughter and I have spent hours poring over her dog breed encyclopaedia looking for a good-natured variety that won’t need excessive amounts of grooming or walking. While my heart belongs to pointers and vizslas (the breed I grew up with), realistically I don’t have the outdoors lifestyle and access to the acres of woodland that they need. At the moment the breed that seems most likely to suit us is the whippet. In general a whippet is lively but not too overwhelming for a household with very small members and visitors, his/her exercise needs are not extreme but still require you to go for a good walk twice a day and the short hair means the vacuuming won’t increase ten-fold. Ain’t nobody got time for that! 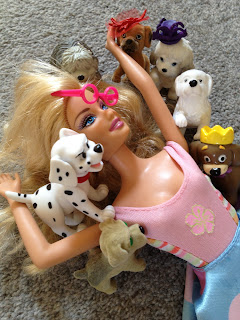 She won't be as pleased when she sees what they've done to her high heels...
But I remain hesitant (which must be torture for my optimistic offspring). So many days of my childhood were curtailed because of ‘the dogs’. Any teenage shopping trip was cut short to return to walking duties, friends could be reluctant to come round if they weren’t too keen on overzealous hounds jumping up and even when I suggested a date for my wedding there was a sigh because it clashed with an important dog show. Seriously.
Because, if you’re doing it right, being a dog owner is much the same as having a child. You made the decision to welcome it into your home and so the buck stops with you. If your dog chews up your shoes it’s less because he/she is a monster and more because you’ve left that dog unattended and bored for long enough it went to look for something to do. Chewing is something to do. If your dog howls so much the neighbours complain, you have to ask yourself where you were all that time. If your dog is fat, not only do you have to pick up the poo and the vet bills, you are to blame. It’s all about the guilt trip.

And that’s what I’m wondering. Do I really need to put myself under any more pressure? I don’t want to be the lady in the park with the unruly dog, any more than I want to be the parent with the disruptive child at school. It’s bad enough when your kids don’t listen to you – imagine standing in a field calling your dog’s name endlessly while it buggers off in the opposite direction. And I’m pretty sure you can’t bribe a dog to behave well in public by promising some extra pocket money.


But there’s definitely space in my heart for a dog – and surely it must just be a matter of time before my head comes round. I still talk to a lot of the dog owners at the park, and regularly get what I can only describe as ‘dog envy’ when there’s a new pup on the block, pulling at its lead, all big paws and enthusiastic eyes. One day, I tell myself, one day…
How about you - do you kids want a furry or feathery addition to the family? And have you succumbed? Let me know in the comment box below.
Posted by AHappyHealthyMummy at 23:20

Vote for this blog HERE!